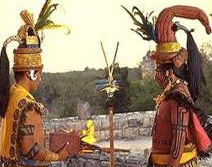 Guatemala's Mayan people accused the government and tour groups on Wednesday of perpetuating the myth that their calendar foresees the imminent end of the world for monetary gain.
"We are speaking out against deceit, lies and twisting of the truth, and turning us into folklore-for-profit. They are not telling the truth about time cycles," charged Felipe Gomez, leader of the Maya alliance Oxlaljuj Ajpop.

Several films and documentaries have promoted the idea that the ancient Mayan calendar predicts that doomsday is less than two months away, on December 21, 2012.

The Culture Ministry is hosting a massive event in Guatemala City -- which as many as 90,000 people are expected to attend -- just in case the world actually does end, while tour groups are promoting doomsday-themed getaways.

Maya leader Gomez urged the Tourism Institute to rethink the doomsday celebration, which he criticized as a "show" that was disrespectful to Mayan culture.

Experts say that for the Maya, all that ends in 2012 is one of their calendar cycles, not the world.

Also about the stuff NASA has been predicting: I was so worried about the huge solar flares we were having and then I found a chart.  One of the worst solar flares would cause Northern lights in my Missouri area.  Well we've seen them here before but not this time!  Totally clueless that anything was going on and gee whiz, we lived to tell about it!  So for the record NASA stuff isn't that important either.

What's more important is what our political leaders are doing.  We are bankrupt and they keep spending more and more and more money.  So what we should all be concerned about is getting decent leaders in congress who can act responsively.

I'd be laying in food and supplies just in case those idiots in Washington do sell us down the drain.  Better to be prepared for the worst instead of waiting and not having anything.  It's happened in other countries and it could happen here.  I wouldn't want my family risking their lives to go get food or supplies when I know now I should be laying them in.  That is why you should be prepared:  So that you and your family will be able to weather what ever happens in our future.