My greatest crisis when I became gluten free was giving up pizza!  I've tried lots of gluten free pizza's and none of them have been acceptable.  This last week, three of my online GF friends mentioned they were trying or had tried cauliflower pizza crust and it was so good the whole family loved it.  So now I've tired it to and even though I'm the only one who swells shut around gluten my whole famliy agreed the Gf cauliflower pizza crust was very good indeed! 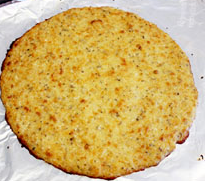 So here's my recipe, tried and know It's good!

Instructions~
Pre-heat oven to 400 F.~
Prep a cookie sheet or pizza stone. You can grease the cookie sheet
or use parchment paper. (I used a Pampered Chef baking stone, which
doesnt require any prep if its seasoned.)~
Remove the stems and leaves from your cauliflower and chop the
florets into chunks. Add to a food processor (I used my Vitamix) and
pulse just until the texture is similar to rice. If you dont have a food
processor or Vitamix, you can grate the cauliflower with a cheese grater
or chop it.~
Saute cauliflower rice in a non-stick skillet over medium heat and
cook until translucent, approximately 6-8 minutes. (You can use the
microwave for this as well. Just place cauliflower in an uncovered
microwave-safe bowl and cook for 8 minutes.)~
In a bowl combine the cooked cauliflower with all remaining
ingredients.~
Spread dough out evenly over parchment paper (or stone) about ¼ to
1/3 of an inch thick. The pizza should be about 9-10 inches in diameter.~
Bake for 25-30 minutes or until the crust is golden, crispy on the
edges and cooked through the middle.~
Remove the crust from the oven.~
Top with pizza sauce and toppings. Be careful not to add too many
heavy toppings as you don't want to weigh down the crust.~
Broil the pizza for 5 minutes, or until the toppings are hot and the
cheese is melted. Allow the pizza to cool for 2-3 minutes then cut and
serve immediately.~ 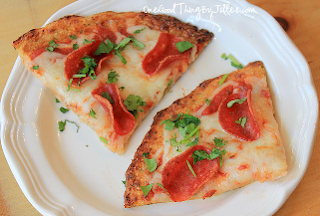 You can top the pizza with whatever you like, just make sure the
toppings are already cooked since you'll only be broiling the pizza for a
few minutes. Also keep in mind that the cauliflower crust isn't quite as hearty as most regular dough-based
crusts so you don't want to weigh it down with a ton of ingredients. Keep is simple.~

We found that this folds over in half very well and made it easy to eat our slice of pizza.  I won't say you can't taste the cauliflower at all because I could taste it but it was a milder taste and the pizza was so very good. One of my online friends steamed her cauliflower and then had to press it to get the excess water out.  I sauteed mine in a dry cast iron skillet and it worked very well without adding water to it.  My husband liked it mostly because it was a much healthier pizza.  Just veggies, herbs and cheese. Yum!  Give it a try and let me know how your family likes it! I'll probably do up several of these and freeze them to use later.  The store had heads of cauliflower for 79 cents when I went Wednesday so got to do something with it all!  Oh I'm so happy to have pizza I can eat again!